In the course of my Council work I was dismayed to recently come across this information. I immediately worked to expose this absolute disappointment for the taxpayer, where we have been deprived of €200m due to what I would consider to be mismanagement by NAMA.

You can see my comments on the issue below and read the full piece as covered by the Sunday Times attached.

A disappointing kick for taxpayers”, as NAMA deprives taxpayer of up to €200m.

This week, a €0.8bn transaction took place which has deprived the taxpayer of up to €200m and instead handed the gain to international investors, it has emerged. The transaction saw the liquidator of IBRC dispose of bonds valued at over €0.8bn at a discounted rate which, had they been simply bought back by NAMA, would have seen the taxpayer effectively save up to €200m.

Fine Gael Dublin City Councillor Noel Rock, has condemned this as “a disappointing kick for the taxpayer which has seen us deprived of any potential savings”, saying “NAMA could have acted, bought the bonds back themselves at the expected discount price of over 20% but, instead, has allowed the bonds to be sold to private international investors and, as per their own published guidance, will now likely pay out on these at their full value, thus depriving the taxpayer of these funds down the line”.

Councillor Rock continued: “It is a huge disappointment that NAMA could not work to complete this deal themselves, as it’s clear that private interests will successfully ‘skim the cream’ off this deal, allowing them to potentially reap up to €200m in profits despite having done nothing more than buy these junior bonds, which have an assured payment from NAMA as per their own terms. While this may have involved some additional legislation in order to allow NAMA to buy back these bonds, I fully believe that this would have been worth the saving to the taxpayer”.

According to a recent Bloomberg report on this issue, Bank of Ireland recently raised its valuation of subordinated NAMA notes to 72% and it is felt that these Junior Bonds were likely sold at a similar rate. According to Stephen Lyons of Davy Investors, “[they’re] not surprised the auction of the bonds went well given the success of NAMA and the investor appetite for Ireland with these bonds expected to give a double-digit yield for investors. This may be the last hurrah for high-yielding Irish financial opportunities.”. This ‘last hurrah’, Cllr. Rock has noted, comes at the expense of taxpayers, who could have consolidated this gain by having NAMA buy back these bonds. “Even the most modest double-digit yield of 10% will have resulted in the taxpayer being deprived of €80m more than they would be had NAMA bought the bonds back themselves. Given NAMA’s guidance has indicated these will be repaid in full, and Davy expects same, it is a safe conclusion”, Cllr. Rock noted.

Councillor Rock added: “Given that NAMA has repeatedly said that it expects to redeem these bonds at face value – eg €0.8bn – it seems incredible that they didn’t just purchase them themselves now at the discounted rate. More to the point, given that these are Junior Bonds which will only be redeemed if all senior debt is redeemed by 2020, something which we now know is highly likely to happen in advance of 2020, it seems all the more inexplicable that this deal wasn’t concluded on terms more favourable to the taxpayer”.

Councillor Rock concluded: “All told, I am disappointed for taxpayers, who are set to lose out here. Against a backdrop of sound fiscal and economic management from the Government, which has reaped benefits for us all, the ball has been dropped by NAMA here, and has deprived taxpayers of a figure believed to be up to €200m in the coming years”. 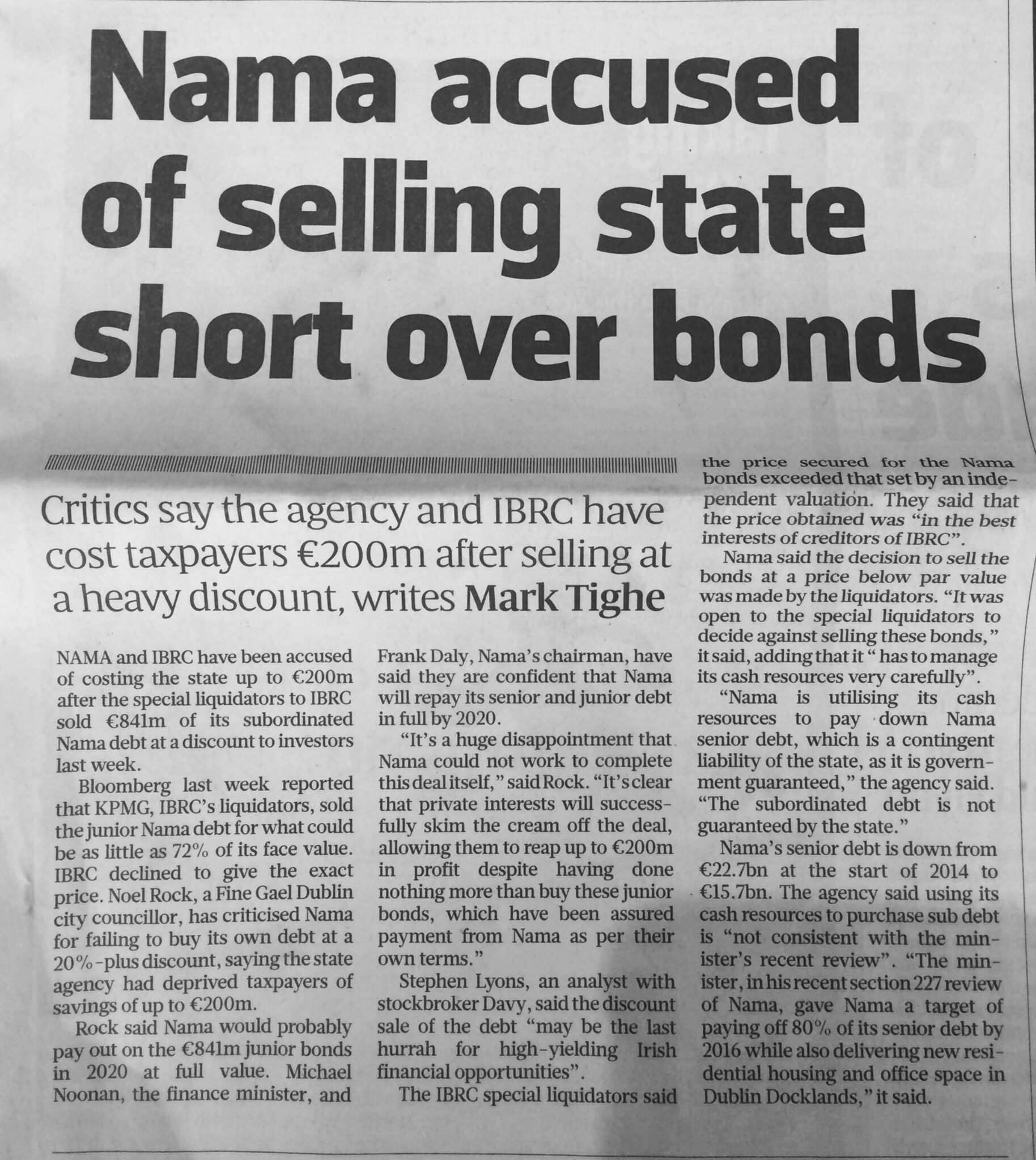